back to wood engravings 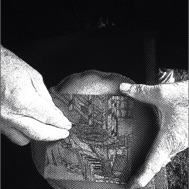 The picturesque sea-side village of Staithes, famous for it's artists colony of  artists back at the start of the  19th Century. (*A list of some the members of this group below). The group disbanded as Members moved from the area,  some of the artists joined  The Fylingdales Group of Artists a new painting group started in 1925.

The shape of the block being the outer edge pf the bracnch cut from a log of English boxwood felled in 1982 in the grounds of Harwood house in Leeds.

Pictures to the left of the block during cutting.

*Members of the Staithes Group